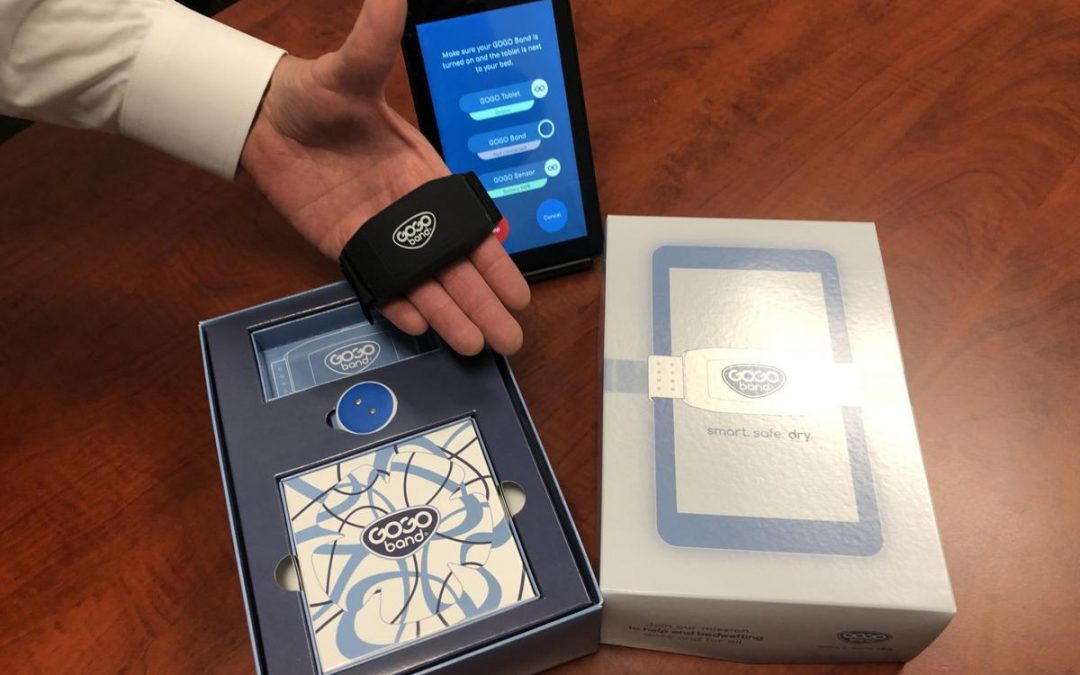 An Ashland-based startup company is preparing for a wider rollout of its product designed to help treat a health condition that affects more than 8 million children in the United States.

GOGO Band has raised about $1.5 million from investors and worked for more than four years to develop its product, which uses a combination of cutting edge tools and technologies to help children overcome chronic pediatric enuresis, commonly known as bedwetting.

“It is the number one chronic health condition in children,” said Jon Coble, a serial entrepreneur who co-founded GOGO Band in 2015 along with Timothy Baker, a Navy veteran with a background in medical products sales. Both men had family members affected by chronic childhood enuresis.

While most children eventually overcome enuresis on their own, for some children it becomes a problem lasting for years, even into the teenage years or beyond, Coble said.

“There is a constellation of devastating consequences if you get into your teen years — social isolation, depression, bullying,” he said.

A variety of treatments are typically used to help with chronic enuresis, including medications and bed pads with sensors that sound an alarm when an accident happens.

“They only mask the problem,” Coble said, adding that the medications can have serious side effects. “The problem with bed pad alarms is they only sound an alarm after the fact.”

GOGO Band’s system taps into the evolving technologies of biometric devices, cloud computing, artificial intelligence and machine learning to help prevent bedwetting incidents before they happen, and to help children learn to wake up and recognize when they need to go to the bathroom.

The GOGO Band system consists of several components, including a band that is worn around the lower leg at bedtime with a biometric sensor that collects data, usually over a period of a few weeks. An online artificial intelligence system analyzes that data to detect patterns such as heart rate variability that signal an impending bedwetting incident.

The system is linked to a bedside computer tablet and to a parent’s mobile phone. It is designed to sound an alarm whenever bedwetting is imminent.

Over a period of a few months, the system is designed to help children better recognize the natural “bladder to brain” signal that enables them to wake up and go to the bathroom, Coble said.

While pediatric enuresis is the first health condition the startup company is tackling, Coble said the biometric sensing technology could be further developed to help with adult incontinence and other health conditions.

“Our whole vision is to be a company that really helps manage chronic health conditions,” Coble said. “We know this technology could also be used as an early warning for asthmatic attacks or migraine headaches.”

The startup is currently selling its GOGO Band systems on a limited basis through its website at mygogoband.com for a discounted price of $290.

The company plans to do a larger rollout of the product online and at retail stores later this year.

The FDA is allowing the product to be sold as a “lifestyle device” right now, but the company is seeking clearance as a Class 2 medical device, which would enable it to be sold over-the-counter at retail stores.

GOGO Band has filed for two patents for its system. “We are hopeful in the next four to eight weeks we will have our first patent issued,” Coble said.

GOGO Band is based at the Dominion Energy Innovation Center, a business incubator in Ashland that provides office space and services for startups. The company also plans to ship its products from a new fulfillment center in Hanover County.

Another capital raise is being planned as the company moves toward wider commercialization.

“Our goal is to hire 8 to 12 people by the end of this year on the technical side, the fulfillment side and the marketing side,” Coble said.

During its four years of development as a startup, GOGO Band has been through almost every layer of the Richmond region’s startup support system, including the Dominion Energy Innovation Center, the Lighthouse Labs program and VCU’s da Vinci Center for Innovation. Coble said Capital One Financial Corp. and Altria Group Inc. also have provided mentoring and research support for GOGO Band.

“It is just night and day compared with 10 years ago in terms of the support and enthusiasm from both the local business and civic community in understanding how important small-business development and entrepreneurship is,” he said.